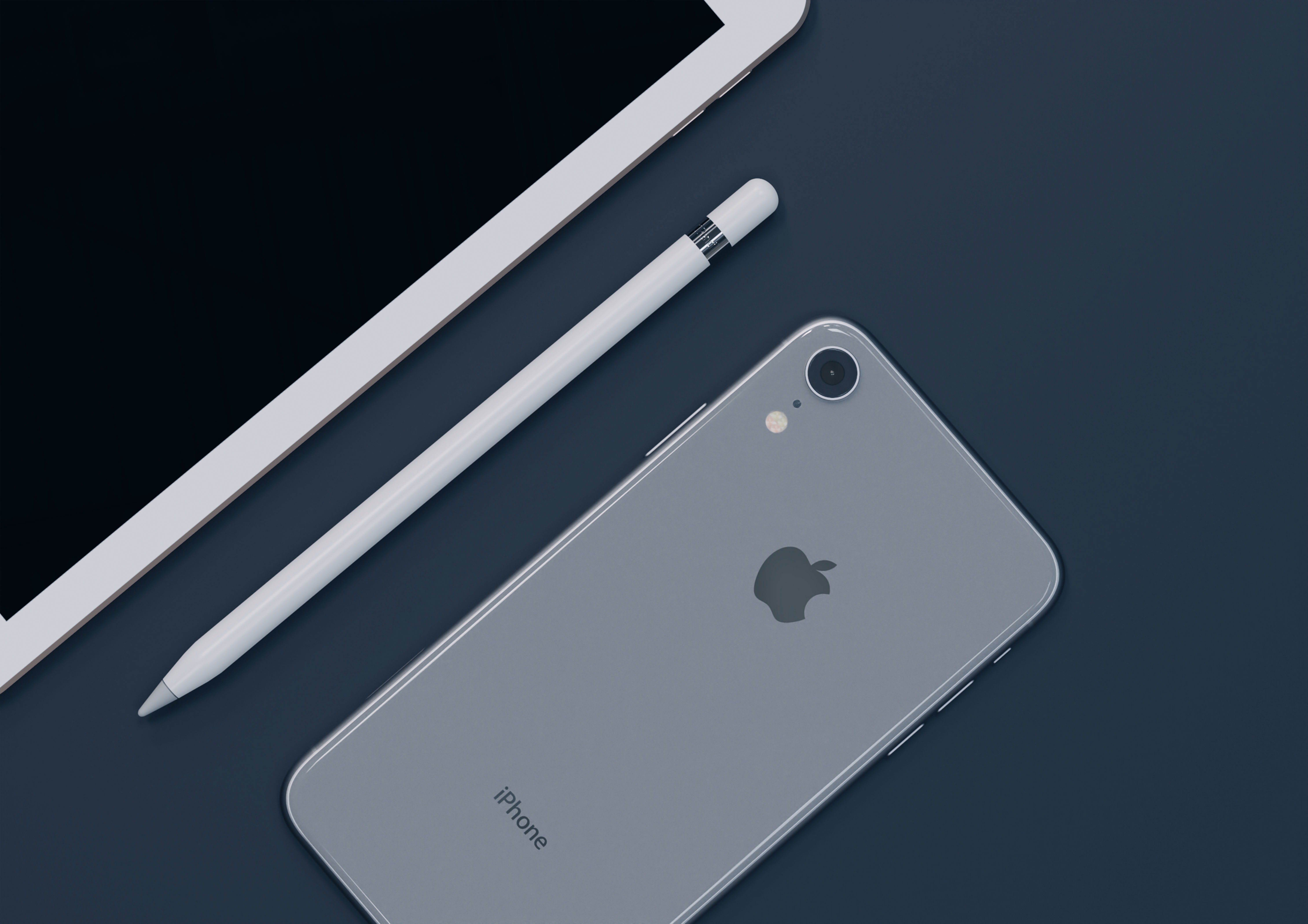 Why Everyone is Talking about Apple and not about your Company

For the last month, Apple has been all over the Internet with the launch of their new iPhones. But how has Apple managed to get so much light on their products? 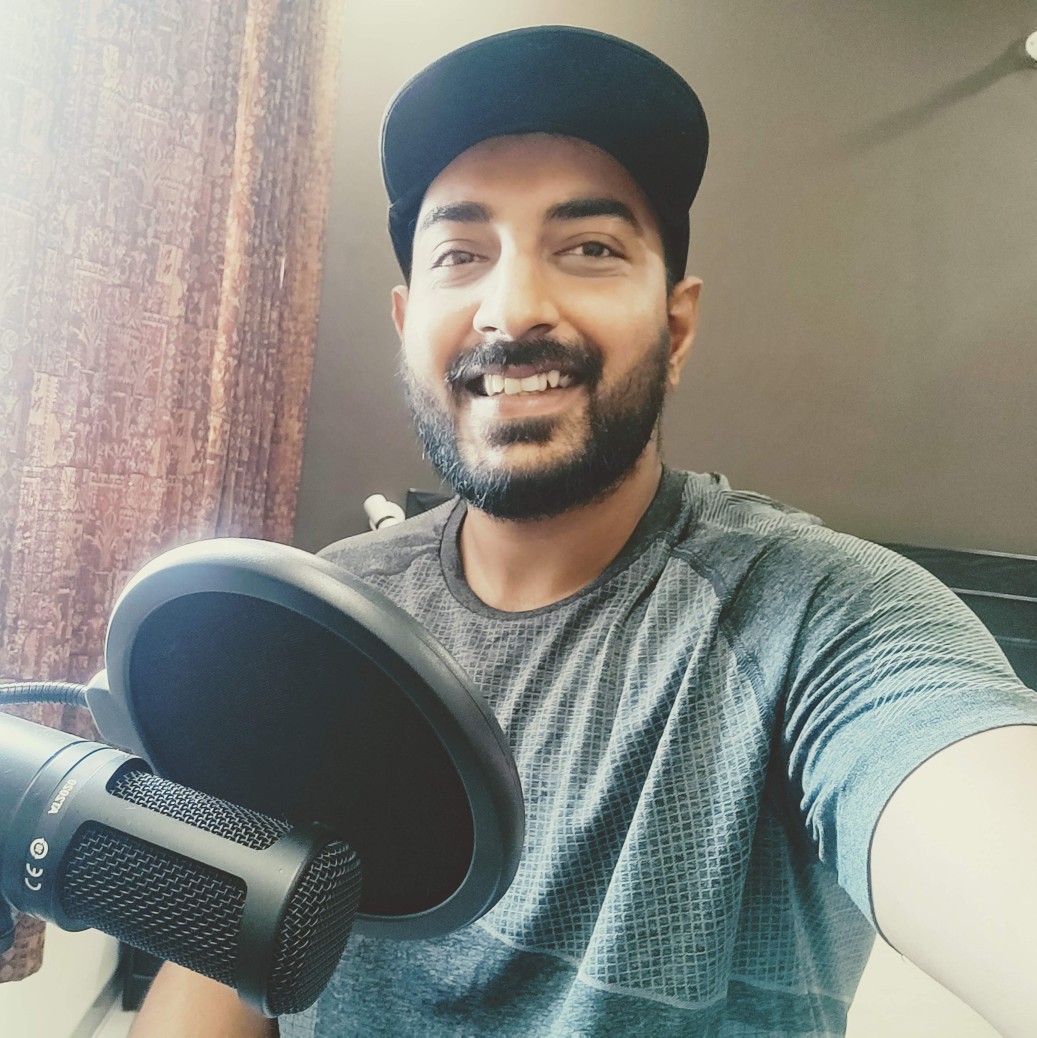 Why Everyone is Talking about Apple and not about your Company

For the last month, Apple has been all over the Internet with the launch of their new iPhones 8, 8 Plus, and X. The tech community is always thrilled to discover the new products launched by Apple.

Each year, the Californian company delivers new features and always improve their products and each year everyone is impressed by what they manage to do.

Every company dreams of having their products as expected and awaited and therefore, Apple is a good company to take example from.Indeed, Apple has been developing its own marketing strategy since its creation, and whether we like it or not, we have to admit that their marketing strategy has been damn effective till now.

In this blog, we’ve analyzed Apple's strategy to give you 5 key points to improve your marketing strategy: you can be the next Apple!

1) Create a unique value to stand out from your competitors

The first thing you will notice is that Apple phones are not called phones: they are iPhones. When you think about it, it's the only phone on the market that is commonly recognized and is called by its name.

Because Apple has created a unique product, with a unique design and has been making it better ever since its creation. They've taken the phone to another level with the iPhone!

The sole purpose of Apple has been to turn the ordinary into something beautiful. This is noticeable when you compare a standard computer with an iMac, or a random phone with the brand new iPhone X which is made of aluminium on the sides, treated glass on its back, and the screen which is absolutely stunning.

Apple really insists on that esthetic dimension of their products and this is the reason why they are so expensive: if you want to ally design and performance, you have to put the money on the table.

But unlike most of its competitors, Apple doesn't stop with the product: everything around the product is made to please the consumer. First of all, it's a true pleasure to unbox an Apple device: the packaging is made of a cardboard box and each piece inside the box is in it's own compartment.

Then when you turn on your device for the first time, all the settings are intuitive and really simple and in a couple of minutes you can use your device. The packaging and all that is around the product is also well developed at Apple.

The point here is that you need to create a valuable product or service: do the best version of what you want to do and make sure that everything is smooth and user friendly from the moment someone buys your product to the moment when he first uses it.

2) Build a community and take care of it

What is smart with Apple is that they've created their own community since the first iPhone and iPods. Over the years, Apple has built one of the most hardcore fan bases for any brand, anywhere in the world.

The “fanboys” who camp out for new product launches may represent a small percentage of Apple consumers overall, but that kind of fanaticism and enthusiasm are rare.

Nonetheless Apple is smarter because they have found a way to fidelize the most skeptical consumers: the Apple ecosystem. If you ever have a Macbook and a iPhone at the same time you know what we're talking about: you just can't go back to another smartphone.

Everything is so clear, so user friendly when you've got both an Apple computer and phone: the synchronisation, buying music, keeping your photos... it's just so nice to feel that you have everything whether you are on your laptop or on your smartphone. This is really a good way to fidelize your consumer.

There is no arguing, Apple knows how to take care of its consumers. Finally Apple has the best customer support in the world: if one of your device has any kind of problem, just call them or make an appointment and go to the nearest store: they will never let you down and will always find you a solution.

3) Speak to you audience with its language​

In the tech industry, using specific and technical words is a common thing to detail every spec of a product. But unlike most of its competitors, Apple doesn't feel the need to use those technical keywords: at the contrary, they do everything to avoid that. Their goal is to use keywords that everyone can easily understand!

Initially, Apple customers won’t find words like megapixels, megabytes or gigahertz. They find words they know and understand. For instance they use very visual words to talk about the screen of their devices.

The "retina display" is just a screen with a high display resolution but it sounds a lot better, and its easier to understand for someone who doesn't know anything about technology.

Sure, the jargon is there for those that need it, but it’s presented in a way that makes you want to learn about megapixels, rather than shy away from them. The art is in the presentation, not in the features.

This quote from Einstein sums it all about the numerous critics that Apple can receive. Indeed, each time Apple launches a new product or announces a new feature on one of their products, the consumers are always divided.

It was particularly striking with the launch of the iphone 7 which didn't have any jack 3.5, the whole tech community was ashamed and Apple received harsh critics. But they need to look at the bigger picture, the removal of the jack 3.5 port was just a first step for Apple in it's long walk to a fully cable-free iPhone.

They have a vision for their products and for the brand in general, and the choice they make can be questionable but they are part of a plan.

The same thing happened with the new 2017 Macbook Pro: Apple decided to remove the classic USB port for a USB-C port. The USB-C port is much more powerful than the classic USB and, according to the specialist, in a few years everything is going to be in USB-C.

Apple is just more agressive than its competitors in term of innovation: they are trend-setter. The point is the following: if you have a global vision for your company and for your products, it may involve some changes that people are not prepared to. ‍

Don't be afraid to set your own trend and dare to change things!

Apple has a very individual way of promoting its products. Unlike other brands you won't see an ad for Apple at every bus stop.

Apple has developed its own advertising with the use of the trendiest digital channels. Celebrities, Social Networks, or even live presentations on their websites: Apple has its own recipe and you should do the same!

For the iPhone 6s, Jamie Foxx was endorsed by Apple to be the face of the brand in the ad on Internet and at the TV. As he is a well known and famous actor, the reach is even bigger with him representing Apple on the screen. And there are not a lot of tech brands which invest on celebrity endorsements for now!

Unlike all the other brands, Apple also joined Instagram not just to promote its products, advertise or make announcements. The purpose of their account is quite cool, they will exclusively feature photos and videos by only using the iPhone. It's a nice way to promote its products and to create engagement within its community!

One of the fastest ways to achieve any goal is to model those who’ve successfully achieved that same goal before. Apple is a role model for any smart modern brand that wants to create a raving fan base and super-loyal customers who will refer their friends and family members.

But the idea isn’t to mimic Apple but to get a sense of what Apple does well and then find creative ways to do the same in your business.You need to create your own brand identity, your own recipe! 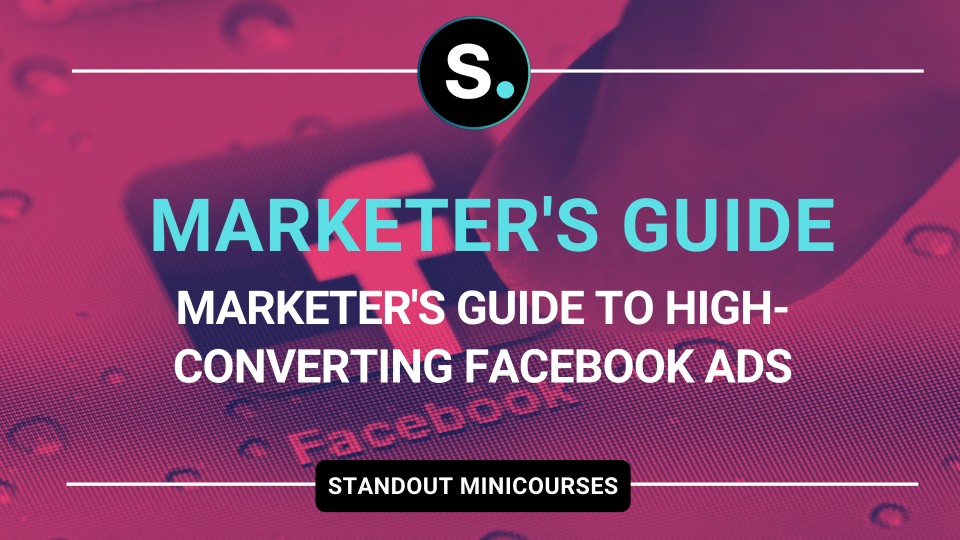 Discover how to sell online to anyone in the world and grow your business in the fastest way through the world’s leading ads platform. Whether you’re selling products, services, or even building engagement for your brand or project, Facebook Ads are the absolute best way to grow your ambitions to new heights! 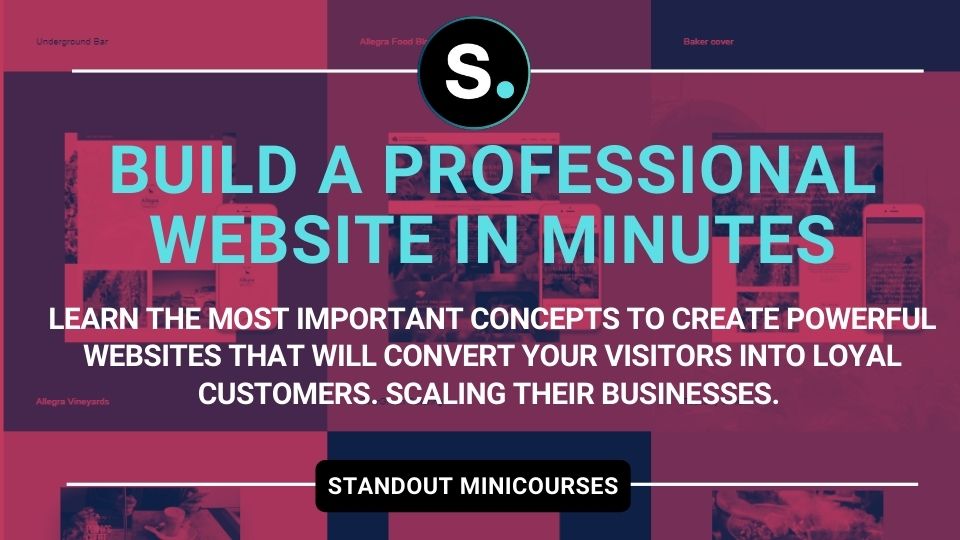 In this affordable Mini-Course, you’ll learn the most important concepts to create powerful websites that will convert your visitors into loyal customers. Start or scale your business today thanks to your new website building techniques. 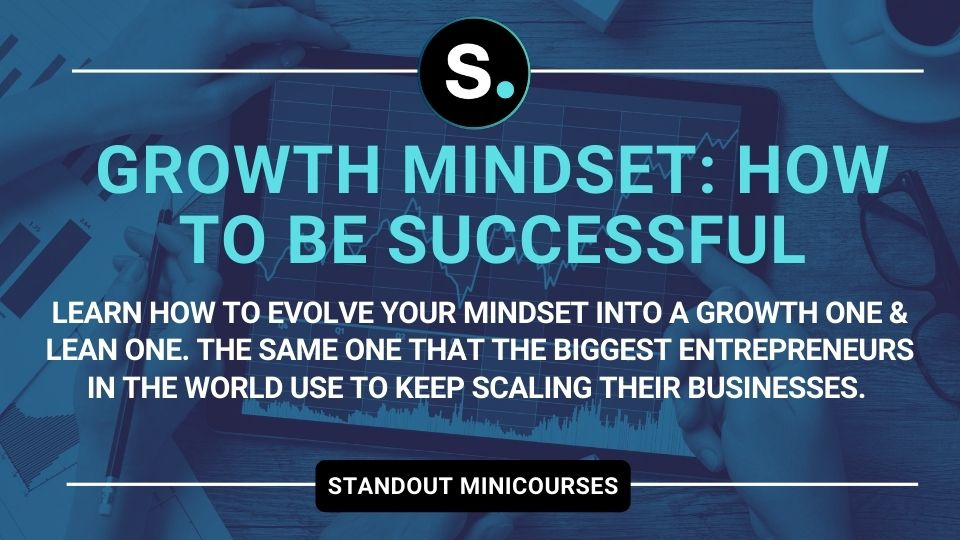 Growth Mindset: How to be Successful

In this mini-course, you’ll learn how to evolve your mindset into a growth one & lean one. The same one that the biggest entrepreneurs in the world use to manage and keep scaling their businesses. Get out of the rat race, this is the often overlooked missing piece in any entrepreneur’s path. 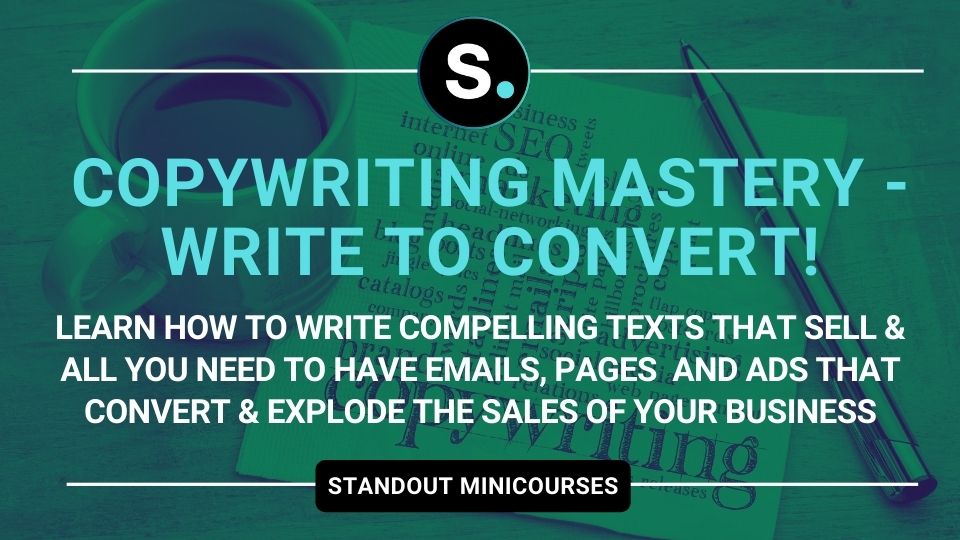 In this exciting course, we’ll reveal how to write compelling texts that sell, build a marketing argument and sales letter, and ultimately how to bundle this unique skill with images to create Ads that will convert strangers into paying customers. This is what you need to have emails that convert, pages, and ads that convert and to ultimately explode the sales of your business. 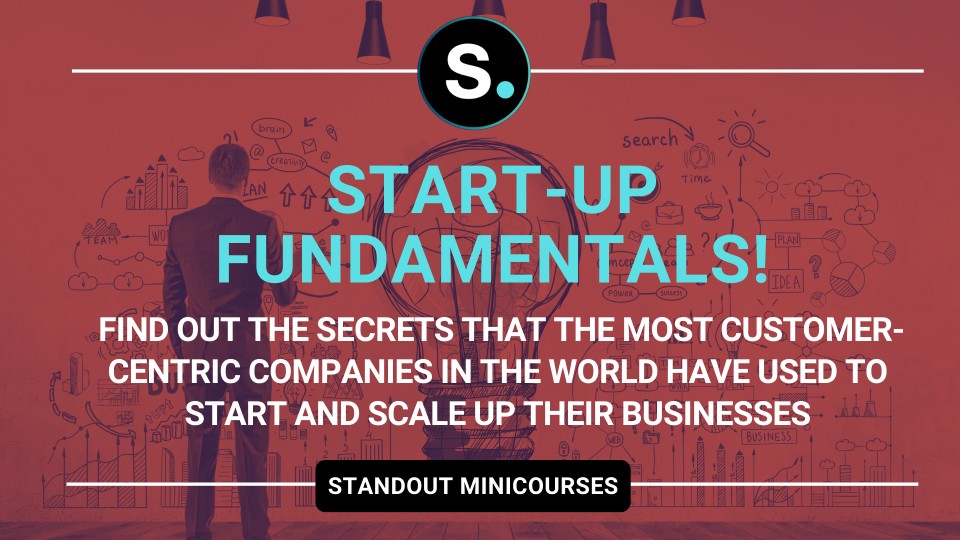 What are the secrets that the most customer-centric companies in the world have used to start and scale up their businesses? From growing Standout to a 7 figures company and consulting over 100 different businesses to grow massively online, we’ve compiled the absolute essential concepts to kickstart or evaluate any start-up idea. 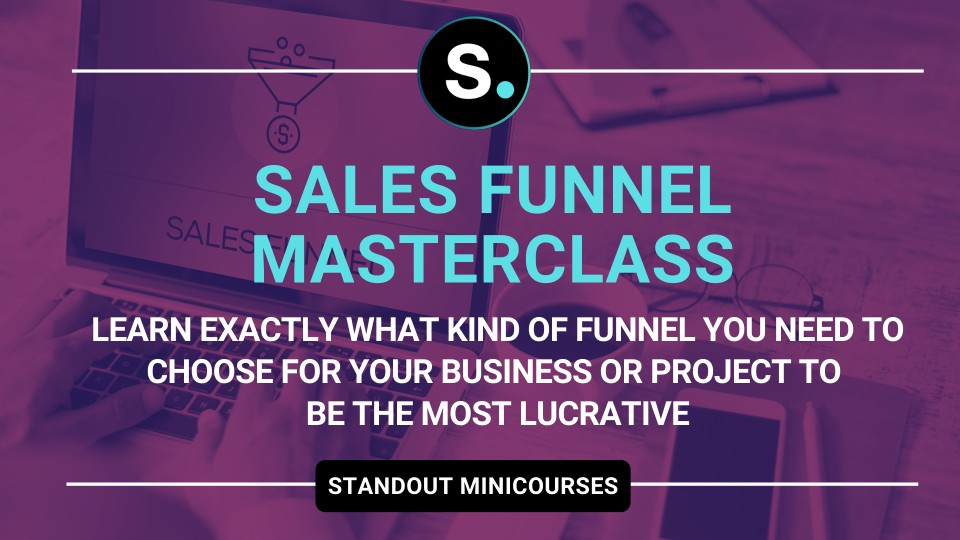 In this Mini-Course you will learn exactly what kind of funnel you need to choose for your business or project to be the most lucrative, and how to maximize the value of every lead who interacts with your business. This is the ultimate secret to recurring wealth-building and business-scaling. 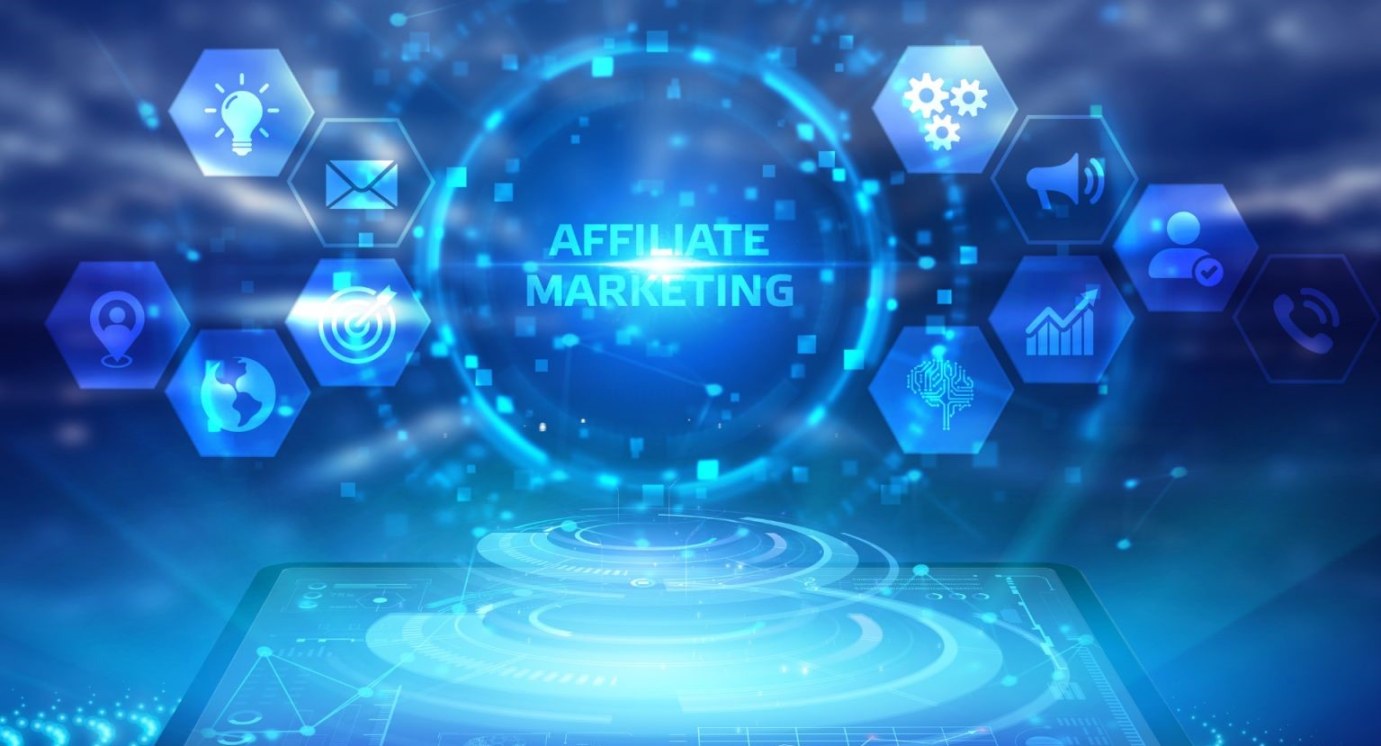 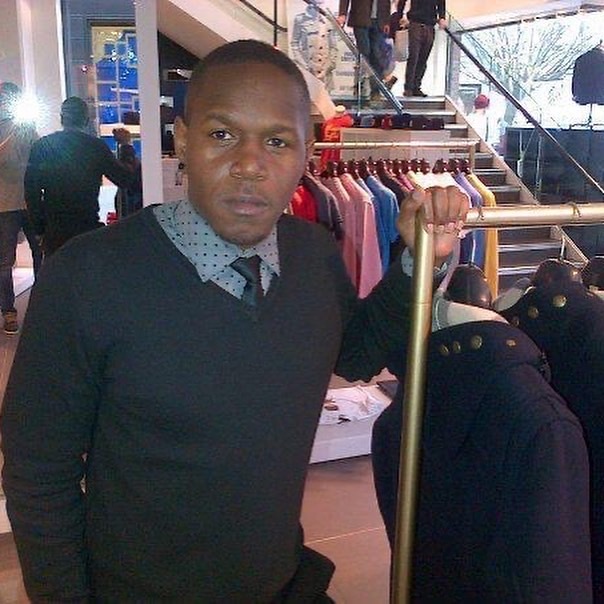 How To Become An Affiliate Marketing Partner - A Complete Guide

This beginner guide will show you how to generate a second income from the comfort of your home with STANDOUT Affiliate Program. 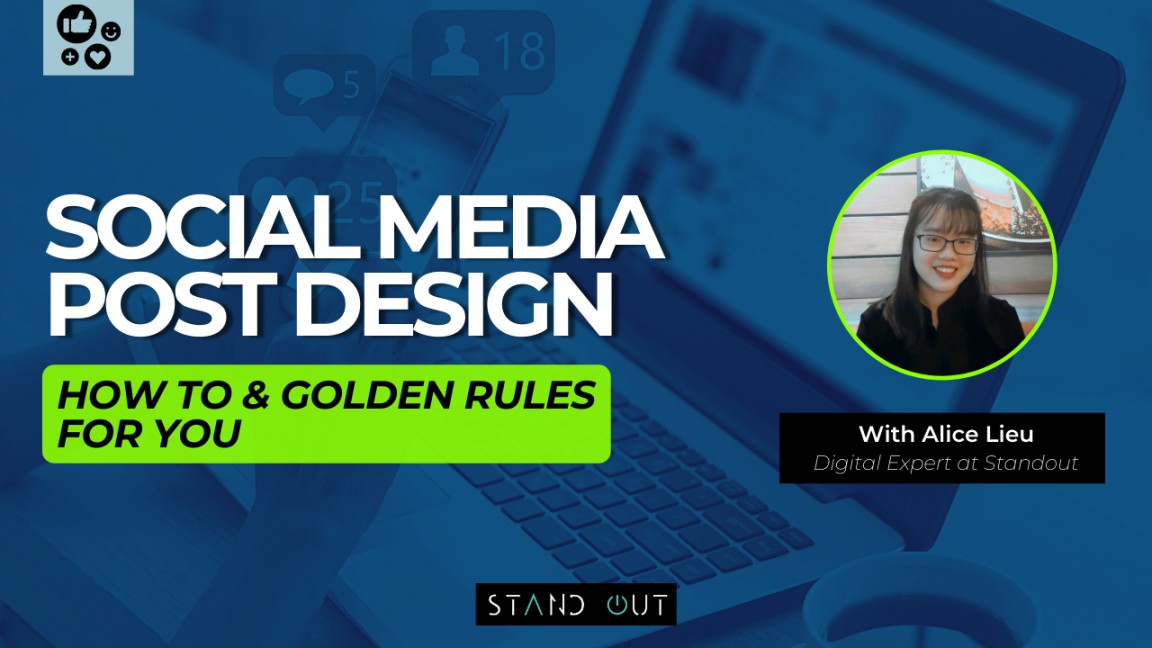 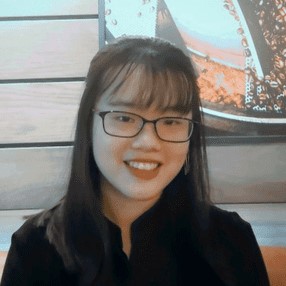 How To And Golden Rules For Your Social Media Post Design 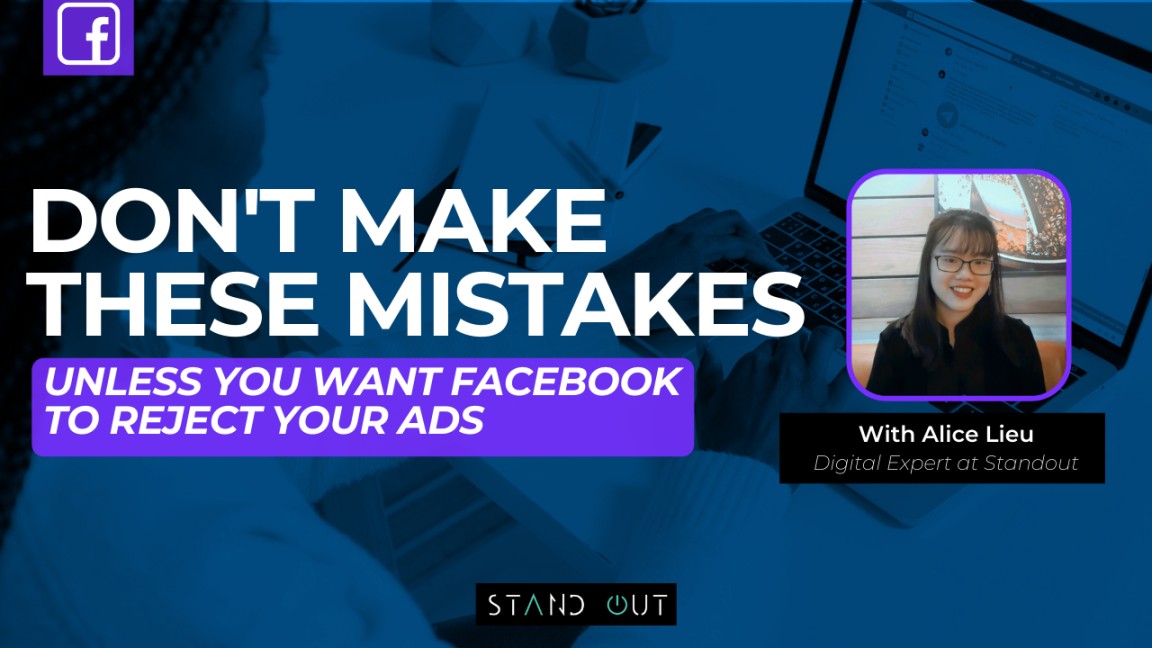 Facebook Ads Rejected? Most Common Reasons And How To Fix This

Facebook Ads got rejected? Check out these most common reasons and how to fix it fast to get on the good side of Facebook! 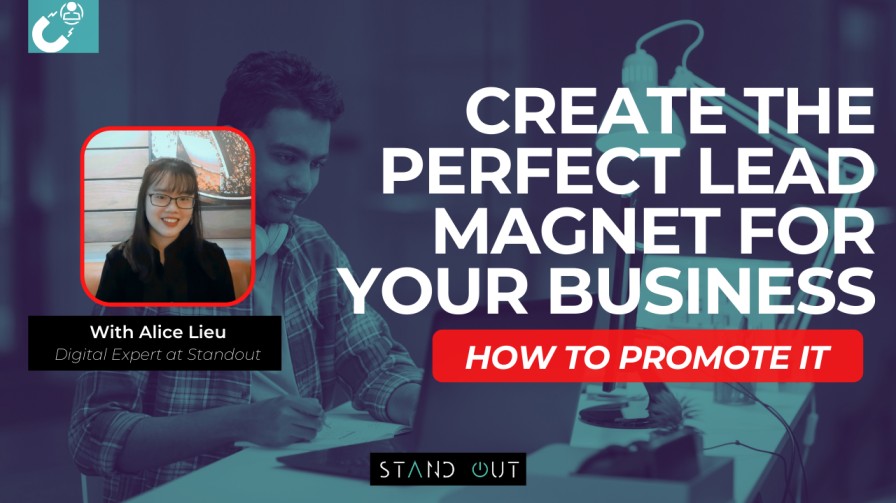 Create The Perfect Lead Magnet For YOUR Business

If you want to generate more leads online, a lead magnet is your best bet! Check out the 2021 guide to create and promote your perfect lead magnet. 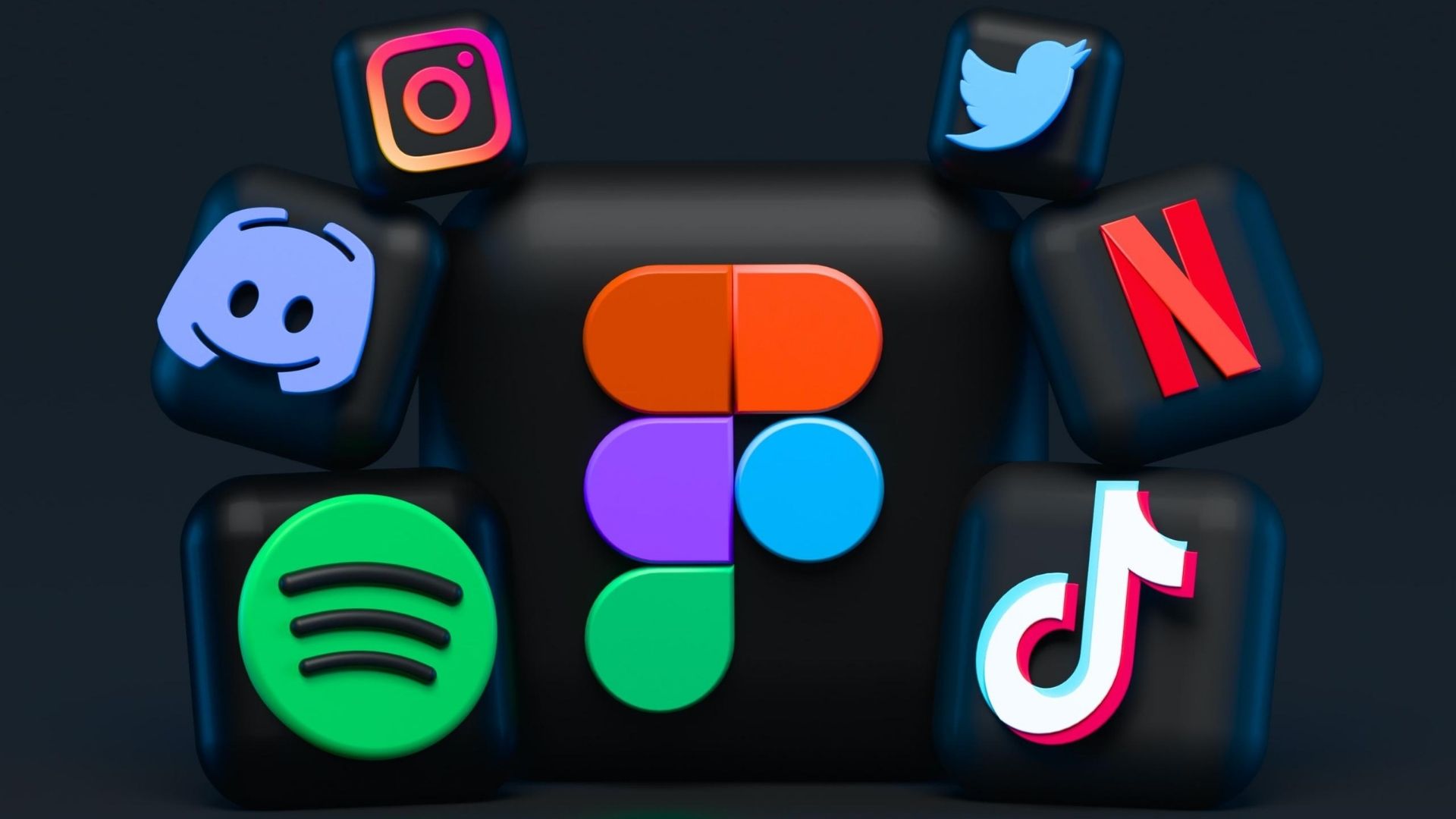 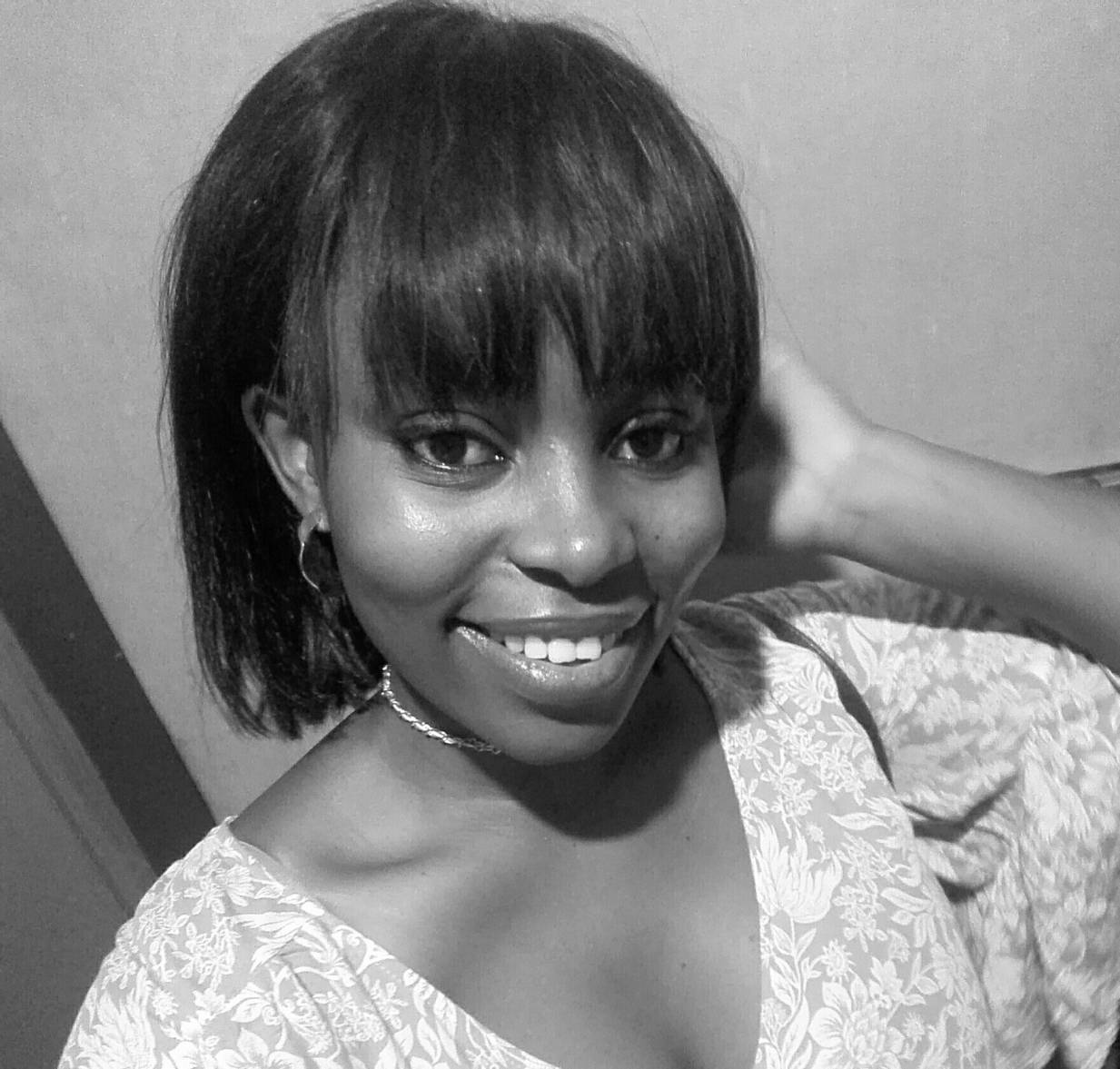 A Product That Sells Itself: The Complete 2021 Guide To Success

Everyone wants to sell, but building a high demand product that sells itself is the central part of the equation. 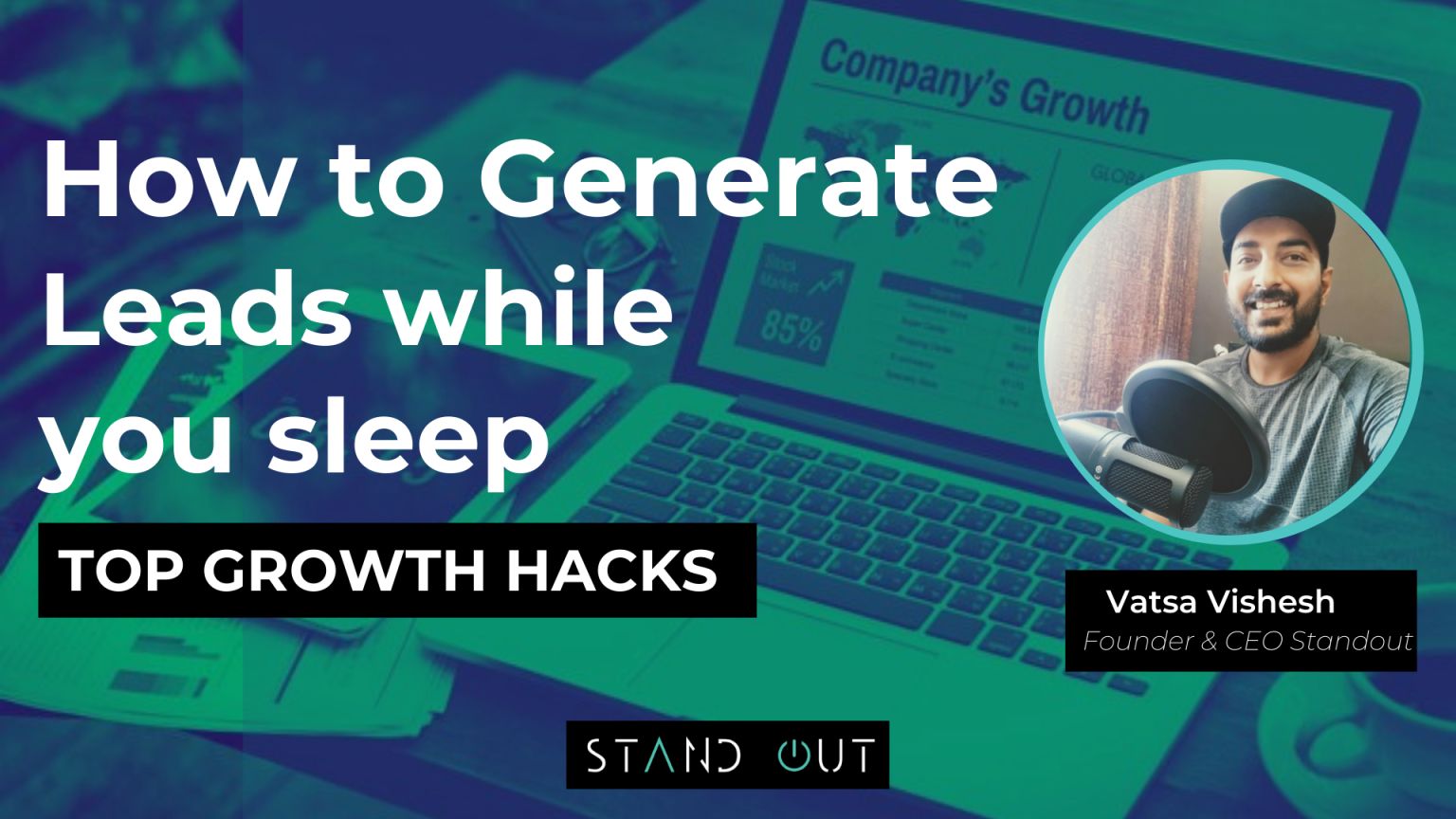 How to Generate Leads while you sleep | Top Growth Hacks

Growth hacks your business with the top 5 most extensive, easy-to-use tools on the market right now.